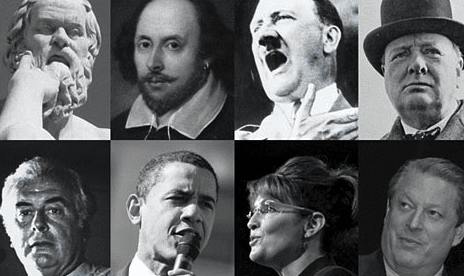 Words carry meaning. They are too often bandied about without thought and little care for consequence.

The above is possibly not a fair comparison and one also needs to be aware of the context, but it’s probably fair to say that Churchill faced greater existential threats, to his country and himself, during his leadership than Mr. Trump. At least up to now.

However, I think the point is made.

One seeks to inspire and motivate the other seeks to play to an audience seeking retribution, in other words, rabble-rousing.

Loose words can cause great damage. They can exacerbate a situation, derail conciliation, misinform and divide.

The current occupant of The Whitehouse has a fondness for using social media to sow division and polemicise almost every issue. He does not operate in a vacuum. His opponents have shown an equal propensity for a sharp, undiplomatic and downright insulting turn of phrase. Where does all this childishness lead?

Any business person worth their salt would tell you that picking fights with all and sundry is a shortcut to oblivion. Yet we now witness national governments engaging in the churlish flinging of petty insults and largely empty threats, simply because others don’t agree with them. Hardly likely to win an argument, let alone friends.

To once more quote Winston Churchill; “Diplomacy is the art of telling people to go to hell in such a way that they ask for directions.”

On a more trivial front, even carelessly using the wrong noun can send completely the wrong message.

Recently the Queensland Tourism Minister, Kate Jones, during a morning television interview on why the Queensland border remains shut, said; “Queensland is the greatest country in the world, and we want to keep it that way.”

It is not clear if Ms Jones doesn’t understand the nature of the Australian Federation in which we live or if it was just a Freudian slip. Either way, not covering herself in glory and potentially sending the message that she and her government see themselves as separate from the rest of the country.

In business, politics, geo-strategic affairs and in just plain ordinary life, words carry meaning. They are too often bandied about without thought and little care for consequence.

Today’s world offers far too many opportunities to mouth-off. Churchill, again; “Life is fraught with opportunities to keep your mouth shut.” Adding to the cacophony benefits no one, least of all those making the noise.,

For business, in a hypersensitised media and social media environment, very often silence is the best policy. When you do choose to speak, carefully consider what you say and how you say it.

Be it an internal communication, customer information, industry position or even social commentary, remember speed is the enemy of both accuracy and thoughtfulness. Take time, get advice, consider the motive and possible outcome and, if you are to be heard, make sure it’s a message worth hearing. One that adds to the discourse, provides valuable information, clarifies issues, reassures and unifies.

We are subjected to far too much divisive drivel to thoughtlessly throw more into the mix.

The sum of all our fears
Scroll to top