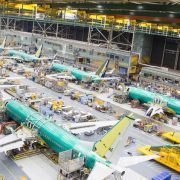 For anyone old enough to remember the title of the 1975 Supertramp album – I’m sorry.

At the time of that album’s release the Boeing 737 had already been in service for seven years and well on its way to becoming the most successful passenger jet ever built.

Little wonder then that with almost 10,500 737s built, across the 13 variants, leading up to the 737 MAX, for which the company held over 5,000 orders, Boeing was very keen for the MAX to be the comprehensive answer to the competitive threat presented by the Airbus A320.

The sheer numbers are staggering. There are over 1,250 737s in the air at any one time and there are two either landing or departing every five seconds. Most of us have flown on 737s more times that we can remember, let alone can count. As late as September last year Boeing were planning to boost production from 55 to 63 737s per month.

So, a little bit at stake when things go wrong. And wrong they went. As we know from the tragic circumstances of the loss of Lion Air Flight 610 and Ethiopian Airlines Flight 302, within five months of each other.

Boeing is in the grip of a proper crisis. All 737 Max have been grounded, orders are being cancelled and the airline is scrambling to explain how automated control systems designed to compensate for the aerodynamic changes created by larger extended range and efficiency engines, could end-up pushing the aircraft into the ground.

The first rule of crisis management is – always tell the truth. Tell it as well as you can, but don’t obfuscate, don’t delay and, most of all, don’t lie.

We won’t know for some time (doubtless after many protracted court cases) if Boeing lied. But they did initially try to blame the Lion Air pilots and resist a grounding of the almost 400 737 MAXs in service.

It is hard to imagine the pressure on corporations when such a critical part of their business is under threat. However, we are talking about people’s lives so, if a crisis is mishandled it can be fatal. Not only for the innocent travellers but also for the corporation.

Boeing is ‘too big to fail’ but those who run it, today, are not. This saga has only just begun.

In any circumstance, the reputation of the company and the careers of those in charge may have been past saving, even if they had fully disclosed what they probably knew after the Lion Air loss. To have waited for second, almost identical, incident and, even then, to try to run from immediate responsibility is not only reprehensible, it may even be criminal

There will be blood. It will come from Boeing’s Seattle HQ.