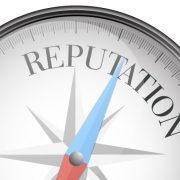 Does it really matter when a major television channel allegedly conspires to commit a crime in another jurisdiction; when a company behaves in ways that show its supposed concern for the environment is trumped by the profit motive; and when a company leader fails accountability in public?

The short answer: yes, it does – it matters a lot. Here’s why. Research shows that reputation influences purchase decision–making and most of all, trust. Lose trust and you’ve probably lost a swag of your customers, too. More than that, you can end up paying a huge opportunity cost.

After the US Environmental Protection Agency decided BP wasn’t doing a good enough clean-up job in the wake of the huge Gulf of Mexico oil spill, it had BP banned from Federal contracts for a while. BP continues to make money around the world – but it could have made so much more.

The reputation challenge can come down not only to perceptions of an organization as a whole, but also specifically to the performance of the CEO. No fewer than five reputation-related reports were released recently and one has interestingly highlighted the need for CEOs to be more visible in discussing societal issues than in talking about financial results. The recent Australia Post CEO Ahmed Fahour is a typical example of this with the Tall Poppies meeting when 100 entrepreneurs and leaders discussed how to realise the potential of Australia’s female entrepreneurs.

The figures show 72% for financial results and 80% for societal issues such as income inequality, public policy issues and the CEO expressing their own views on societal concerns. That’s confronting for organisational leaders who think that they only have to satisfy their board and the shareholders. In fact, the survey showed that 65% of respondents thought CEOs focused too much on short-term financial results while nearly as many (63%) believed CEOs were not focused enough on job creation.

All the surveys highlight the fact that reputation is a complex construct, and that trust should not only focus on being trustworthy, but also having a positive influence on society and conducting business honestly and ethically.

The events in Australian of recent times affecting reputation show that it’s time not only for executives to take reputation more seriously, but also to ask themselves whether their public relations strategies are helping to build and protect this vital intangible asset. It’s not for nothing that the London-based Chartered Institute of Public Relations calls PR ‘the discipline which looks after reputation’