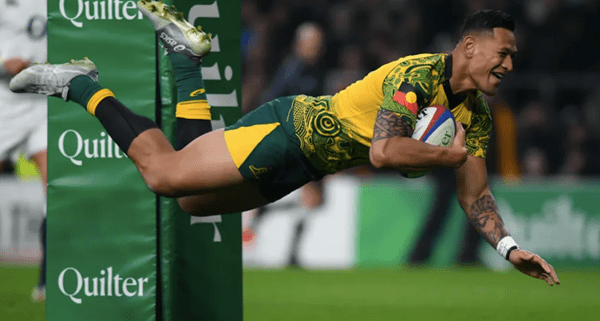 When considering the recent Israel Folau saga Voltaire’s famous “ I may disagree with what you say. But I will defend, to the death, your right to say it” should be a guiding principle for any, secular, democratic society.

Sadly, social media and the offence industry have created the modern equivalent of throwing the Christian to the lions. The social media pile-on.

The corporate leason in the response of a large, otherwise generally silent, portion of the population is that buying into the virtue signalling game can be dangerous.

The progressive views of the QANTAS CEO are well known, and no doubt sincerely held. The controversy is unlikely to do QANTAS any real damage. Operating in a domestic duopoly, they can afford to go out on a limb, from time to time.

Not necessarily the case for other vocal commercial organisations. What has a sponsor of Rugby got to gain from indulging in commentary on such a fraught matter?  More to the point, what could they have to lose?

Even more perplexing is what possible gain could there be in sponsors of Netball joining in on the, as former Human Rights Commissioner Gillian Triggs puts it “ …public bullying” of Maria Folau for expressing support for her husband’s fundraising efforts?

Are companies attempting to capture the zeitgeist? If so, there’s a fair chance they get it as wrong as pollsters predicting recent election outcomes. Are they projecting the views of their management? Also a risky proposition; likely to alienate as many as it pleases. Or are they seeking to take the moral high ground? Not an approach welcomed by most consumers?

Of course, they could just be thoughtlessly joining the herd. Anyone who knows much about herds  knows they have a tendency to turn, rapidly, without warning and for no apparent reason.

In our experience the best policy for a typical commercial entity, in such genuinely contentious situations, is to remain silent.

Sure, we all have a responsibility to call-out egregious injustice and abuse. But not even Folau’s most trenchant critics have elevated his ‘crime’ to such a level, yet.

Commercial organisations have a principal responsibility to their shareholders. Joining the scratching and biting in the back alleys of social media is unlikely to be amongst the KPIs expected of them.

Social media. How hard can it be?

Crisis? What Crisis?
Scroll to top